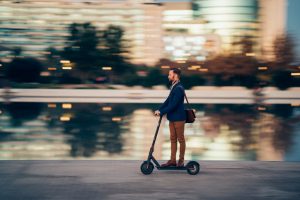 An easy ride or a biblical plague supported by elites that jeopardizes public safety?

A plague of biblical irritations is how many people in California are seeing the use and the supposedly accepted practice of discarding of the temporary transport known as electric scooters — or e-scooters.

Here’s How It Works

Once at the desired scooter, a soon-to-be-rider uses a smartphone to scan a bar code on the scooter, taps “unlock” in the app and the ride can begin, according to an April 21, 2018 post on Quartz.

Most of the services cost $1 per half-hour ride and then about 15 cents a mile or minute.

Supporters of e-scooter companies like Bird say benefits include:

Foes say the e-scooter industry needs to be regulated. One controversy is that once the ride is done, the practice is for users to leave the scooter wherever they happen to stop and the company tracks each one by GPS.

Critics say such discarding of the e-scooters essentially is littering and hazardous for pedestrians.

EHS Today said e-scooter companies should be required to provide central drop-off sites that are staffed.

Establishing hubs for discarded e-scooters would avoid the sight of heaped unoccupied scooters while offering places for users to get instructions on proper use and traffic laws. That would be helpful because many scooter riders are inexperienced tourists.

E-scooter operators are supposed to be at least 18, wear a helmet, and avoid sidewalks.

"It is like the wild west when it comes to scooters," said Attorney Pete Clancy. "Very little regulation, and the companies are all rushing in trying to establish market share at the expense of safety and public health."

At least eight people in the U.S. have died while using rentable e-scooters since the fall of 2017. Many scooter riders remain confused about what traffic laws they should follow, according to Consumer Reports.

Officials in Fort Lauderdale, Florida temporarily banned e-scooters. That came after the electric-powered scooters were involved in a “number of crashes” since November, according to Local 10 News and local10.com.

A 27-year-old tourist riding an e-scooter was killed after getting struck by a car on Fort Lauderdale’s North Federal Highway in April 2019.

Bird reached a settlement with the city of Santa Monica in February 2018 over allegations that it failed to secure business licenses and vendor permits, according to the Los Angeles Times.

Bird pleaded no contest and agreed to pay more than $300,000 in fines and secure proper business licenses.