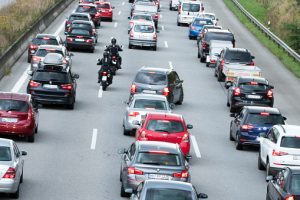 Motorcycle lane-splitting is like acupuncture in that it seems like doing it shouldn’t be safe but it can, in fact, be safer than not doing it — at least in the eyes of advocates.

Lane-splitting refers to riding a motorcycle in the space that exists between lanes or rows of slow-moving or stopped traffic that is going in the same direction as the motorcycle.

Arguments for and against motorcycle lane-splitting

Lane-splitting during commute times and at speeds under 50 mph is considered safe and leads to fewer crashes than other times of the day, according to a story by The Mercury News of San Jose, California.

Foes of motorcycle lane-splitting also said the practice is dangerous for bikers who might be struck if a truck or car suddenly changes lanes. Another danger is that a lane-splitting motorcyclist might startle a car or truck driver who sees a lane-splitter whizzing past them.

A former Arizona governor in 2010 vetoed a bill that would have legalized lane-splitting for motorcyclists. She cited concerns raised by federal and state officials about the safety of letting motorcycles operate between rows of stopped or moving traffic.

AAA opposes motorcycle lane-splitting on the basis that drivers who don’t expect to be passed by a vehicle traveling between lanes can side-swipe a motorcycle or turn into its path, according to Pew Charitable Trusts. Lane-splitting also goes against AAA’s recommendation that motorcyclists do all they can to stay visible to other drivers.

A study by the Safe Transportation Research and Education Center of the University of California, Berkeley, in 2015 found that lane-splitting is “relatively safe” if done in traffic moving at 50 mph or less and if motorcyclists do not exceed the speed of surrounding vehicles by more than 15 mph. Risk of injury “rose significantly” when a lane splitting motorcyclist went over 15 mph faster than surrounding vehicles.

Being caught in congested, stop-and-go traffic is one of the most dangerous situations for motorcyclists. Car and truck drivers can be distracted and inattentive in such traffic. That can increase the risk of vehicle-motorcycle contact, such as getting rear-ended, which can be disastrous for motorcyclists, who are less protected and more exposed atop the motorcycle than drivers inside a vehicle.

Another advantage of lane-splitting is it helps motorcyclists deal with the heat. Sitting for lengthy periods on a motorcycle exposed to the blasting heat in summer can cause physical harm to riders and make their bikes overheat.