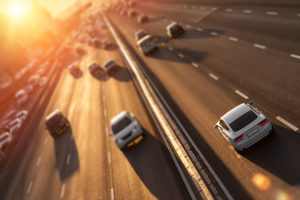 In 2017, California had the second highest number of traffic fatalities (3,602) in the nation – just behind Texas. Many of these deaths occurred on highways, which in our state, are often congested and dangerous to drive on.

According to SafeMotorist.com, the maximum highway speed in California is 65 mph. Two-lane undivided highways have a standard speed limit of 55 mph. In addition, California enforces a “Basic Speed Law,” which makes it illegal to drive at a speed that is unsafe for conditions.

Nearly 37,000 people have been killed in traffic accidents attributed to rising speed limits over the last 25 years, according to the Insurance Institute for Highway Safety (IIHS). IIHS identified a dangerous pattern – traffic fatalities increased by 8.5 percent every time the highway speed limit was increased by 5 mph.

While traffic fatalities are significantly lower than they were in 1993, researchers believe they would be even lower had the speed limits not been raised.

Despite the emerging advanced vehicle safety features that come standard on most new vehicles, traffic fatalities are stubbornly high. This has prompted Consumer Reports (CR) to further investigate the matter. They found that speed remains one of the leading factors.

“While the statistics for speed alone are scary, it’s expected that they could have been much worse if cars hadn’t made so many gains in terms of performance and overall safety,” said Jennifer Stockburger, director of operations at CR’s Auto Test Center.

An even bigger problem: many drivers don’t comply with the posted speed limit. For example, if a highway speed limit is 80 mph, it’s likely that the average flow of traffic is traveling at 85 mph or faster. If the speed limit was reduced to 55, the flow of traffic would be at a significantly lower speed.

One study conducted in Boston in 2017, found that when the speed limit was reduced on city streets, the drivers also reduced their speeds. This even applied to drivers who exceeded the speed limit.

CR cites National Highway Traffic Safety Administration data that suggests a yearly increase in traffic fatalities since 2011. In conjunction with speeding, drunk driving and failure to wear a seatbelt are common factors in the rise of road deaths.

Your legal recourse after a crash

Speed kills, and even if it doesn’t, it results in serious, debilitating injuries to victims. Please be advised, if you have been injured in a crash caused by another driver exceeding the speed limit, you have rights that should be upheld. Contact an experienced car accident attorney at Clancy & Diaz, LLP, based in Walnut Creek, California.