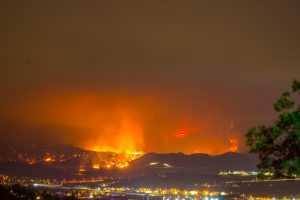 The wildfires tearing through California this past summer have caused enormous amounts of damage and have become the largest in state’s history. These blazes have become the norm in recent years, as our state hasn’t had a month since 2012 where there wasn’t a wildfire.

California now has more firefighters deployed than at any other time in the state’s history, with another several dozen firefighters coming from Australia and New Zealand. In addition, a battalion of infantry soldiers from the United States Army was deployed and 17 states have sent their own equipment and firefighters to aid the effort.

This has put a strain on resources and the firefighters themselves, who often continue their work even after losing their own homes in the fires. The damage spurred Gov. Jerry Brown (D) to declare a State of Emergency for several counties in the state.

The fires have claimed lives, damaged infrastructure and prompted evacuations. This situation has also prompted the local Department of Transportation to relax regulations for truck drivers. This is meant to ease the transport of supplies that are so desperately needed.

Drivers will be required to notify motor carriers or law enforcement officers that they’re hauling equipment meant to support firefighting efforts for the duration of the declared emergency. In the relaxed regulations is an allowance to exceed the mileage limit a commercial trucker can drive in a 24-hour period. In addition, truck inspections at weigh stations will be expedited. Trucks will also not be required to track their driving time and some equipment and load securement standards will be exempt.

Drivers who go too far in taking advantage of these relaxed laws may cause an accident, and in the event of a crash, you still have rights that must be upheld. Trucking accidents often result in life-changing injuries or the death of one or more people. That's because drivers and passengers in smaller vehicles are no match for much larger commercial trucks, even in relatively low-speed accidents that might have resulted in only minor injury if the vehicles had been of a similar size.

If you or someone you know has been involved in an accident with a truck, contact our office today.